More safety in the case of fire

With the newly developed and patented pressure equalization, pressure overload valve (DAÜ valve), tmax provides increased fire protection in the event of a so-called thermal runaway, i.e., in the event of a fire inside the enclosure, thus helping to minimize the thermal risk.

Requirements for a valve: Pressure equalization and overload

Since lithium-ion batteries are currently primarily manufactured with oxide cathode material due to the high charge density, a fire once ignited will henceforth supply itself with oxygen. This therefore continues to burn even in the closed case and there is a risk of propagation (i.e., ignition of other, neighboring battery cells).

Without constructive measures, the pressure generated in the case becomes too high, there is a risk of bursting or failure of sealing systems, and the highly toxic flue gases can escape in an uncontrolled manner. The valve is designed to prevent this by releasing the flue gases into the environment in a controlled manner at a defined overpressure. Due to the high temperatures that occur, the basic structure of the valve should be fireproof.

Since the DAÜ valves available on the market do not meet the requirements in terms of temperature resistance and necessary (low) accurate burst pressure, tmax has developed its own safety valve. The implemented design principle ensures a minimum tolerance of the individually designed burst pressure (from 250mbar). The DAÜ valve also features a compact design and meets the IP-67 and IP-6k9k protection class. All individual components are manufactured without specific tooling, and the air flow and bursting pressure parameters can thus be scaled in a simple manner via adjustments to the geometry. Even smaller quantities can thus be produced without tooling cost surcharges. 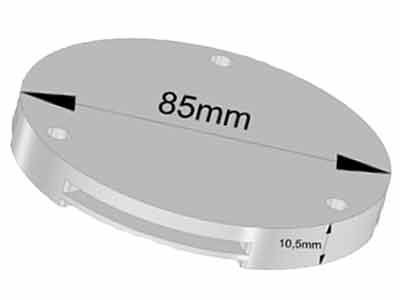 The metallic design ensures optimum EMC shielding and allows an optional connection for guided smoke degassing via a connected duct system. The use of a semi-permeable membrane compensates for the natural expansion of heat during charging and discharging of the battery and the atmospheric pressure variations of the environments.

The pressure overload function (bursting function) is realized by means of a bursting disc. When the pressure in the body becomes too high, the interaction between the diaphragm and the rupture disc allows the valve to open. This allows the pressurized gas to escape from the housing in a controlled manner. The labyrinthine design also ensures that in the event of a fire, the escape or spread of flames is greatly reduced.

The system was tested for functionality through trials in tmax’s in-house R&D laboratory. The variability of the burst pressure setting options, their narrow tolerance and the protection class could be confirmed accordingly. The system was patented.

Get our new e-books, brochures and info materials now.
To the downloads